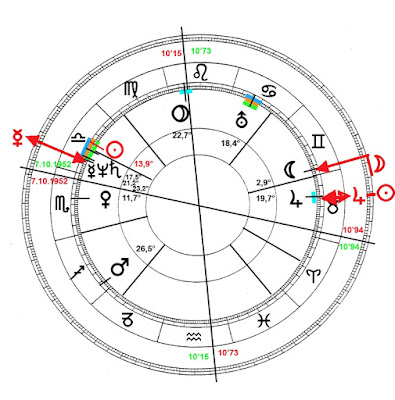 1. the Sun of the May 9th,  Victory Day, each year is with Putins Jupiter, in other words: his birth - Jupiter = on the grade of Victory Day - Sun.

Jupiter bright co-ruler of his social ability/house, in productive square with Pluto, ruler of his essence/ascendant.

"after Putin shook hands with military commanders on the square.When he was walking back onto the raised platform he saw that a very elderly lady guest had dropped something on the ground.And like the gentleman he is.He bent down and picked it and handed it to her.And then gave her a hug.It was touching.And you could tell it wasn’t a show for the camera.And three,when they were walking away down the square some plainclothes security personal ( Russian or Israeli?) “bum-rushed” an old veteran in uniform out of the way.Putin saw that,and walked over to the veteran, talked and shook hands with him.Then allowed him to walk with him.I’m always impressed by Putin’s ” kind human behavior”.He didn’t have to help the elderly lady,nor show respect to the elderly veteran.He could have pretended not to notice.But he did do the right and gentlemanly thing."

3.  Putins Mercury/Neptune intellectual innocence, in resonance with Aries/Mercury of today in the speech about war and  the "fragile peace on earth":

This is our most important holiday that makes the entire nation proud … 73 years ago the Great Patriotic War ended. Nazism was defeated, we put an end to cruelty and barbarity, we defeated the criminal plans for world superiority. The defeat of nazism was real triumph… All the nations realize that it was Soviet Union that determined the outcome of WWII. … our solders, our people … unparallel courage …

Today sometimes what this soldiers did is forgotten or distorted. The real heroes are being forgotten, history rewritten. We will never allow this to happen. It is our duty to preserve the memory of the valor of soldiers who gave their lives for others all over … soldiers who fought on the second front, members of anti Hitler coalition … We will always be proud that Soviet people did not backed down while some other countries preferred to capitulate, were hypocritical and collaborated with the Nazis. …
No other country in the world faced the invasion like that … evacuated millions of people, thousands of factories under fire. It seemed impossible, but people worked selflessly for the motherland, for the victory. … Nothing can measure the valor of our soldiers and marshals … They fought hard. Every piece of land they treated as the most important one. … Moscow, Stalingrad, Kursk, Dnieper river, broke the Leningrad blockade, we liberated the capitals of Europe and eventually took Berlin.
It did not matter which ethic group or religion you belonged to, where you used to live, where you came from. All those soldiers had just one motherland, they all fought to the last drop of blood. May 9th unites all generations with history of courage. … every family has its own heroes … we cherish the memory of all those who did not return from the war … we remember all sons, daughters, husbands, wives, fathers, mothers, brothers, sisters, family members and friends,
… minute of silence …
… we remember the tragedies of the two world wars … it keeps us from being blind … new threats, selfishness, nationalism and exceptionalism. We understand how serious those threats are. The entire mankind has to realize that piece is very fragile. We all should hear each other, respect each other. …